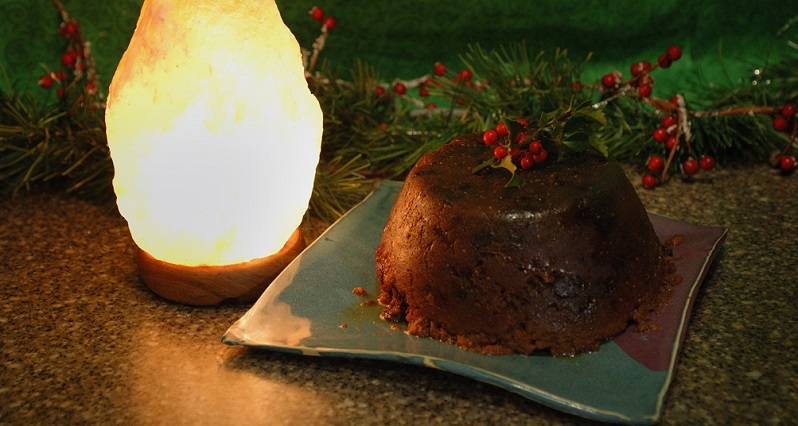 Christmas pudding is more of a cake than a pudding. The traditional English recipe has been updated with coconut oil instead of lard.  Photography credit: store manager Jim Leahy.

A Child’s Christmas in England

“One Christmas was so much like another in those years…”  A Child’s Christmas in Wales by Dylan Thomas has become a fond tradition for me in the 27 years I have lived in Concord, attempting for myself to recall the lost world of a receding childhood romanticized by selective memory and an ever-present love for the family that we once were. My father, grandparents, uncles, aunts, “alas no longer whinnying with us,” live on in remembrance of Christmases past.

In the 1950’s and 60’s we spent Christmas every year at my grandparents.  They had founded a small club on the outskirts of Oxford.  Temple Farm Country Club they called it.  The oldest part of the building dated back to the twelfth century, and during the reformation it had served as a secret monastery.

Every year family and friends gathered to celebrate at their table.  My two brothers and I looked forward to the Christmas presents, some surprises, others secrets which Granddad had been unable to keep despite Gran’s admonitions.  While the adults indulged in a little Christmas spirit at the bar, we waited for uncles and aunts, some by blood, some simply by deference and familiarity, to shower us with gifts.  Amidst the fulfilled hope of toys and the disappointment of socks, we absorbed the atmosphere of the season.

If we had stayed over Christmas Eve we were still sleepy from the excitement of having been up until midnight to receive the first gifts from our grandparents.  We slept upstairs in a guest room, wondering whether we would hear the gray lady who haunted the hallways, or if anyone would see the coach full of headless monkeys that came up the driveway after midnight, and if the driver looked at you, you would die within the year.

Christmas dinner started at two o’clock after the regular patrons left the premises to the inner circle of relatives and friends.  Sitting around the table with our gaily colored paper hats, after reading the jokes and inspecting the tiny toys from our pulled crackers, trying to get the miniature ball into the miniature cup to which it was attached by a string, we ate our way through all the yuletide fare, which was topped by Christmas Pudding.

It is the Christmas Pudding tradition which has stayed with me.  A few years ago I decided to revive that tradition and looked up a Christmas Pudding recipe.  Not surprisingly it was full of things I now foreswear.  Sugar, white flour, lard, ale, liquor.  “Well, I bet one can make it with entirely healthy ingredients,” I said to myself.

Fifteen years later I have enjoyed many years of serving this recipe to family and friends, who have all delighted in this flavor of old England.  All have wondered at the fragrance and flavor.  I’m sure the recipe has undergone many changes.  I never follow it exactly, but it always comes out perfectly.  The following recipe makes one large and two small puddings.

On the following day, stir and moisten if necessary.  (I never have).  Fill well-greased pudding basin to within one inch of the top, cover with pleated greaseproof paper (wax paper), and tie tightly (I use a rubber band).  Place on a trivet (small wire rack) in a large covered pot or pressure cooker of boiling water.  The water should come one half to three quarters of the way up the pudding basin.  Steam for 4 hours (three if you use a pressure cooker), checking and refilling water level as necessary. I burned this pudding twice by failing to do so.

I have served this both right away or a few days later, in which case I just wrap it in greaseproof paper and refrigerate it, then re-steam it for 45 minutes before serving. My favorite accompaniment is plain cream, organic of course, poured over it.  Then I close my eyes and think of England.