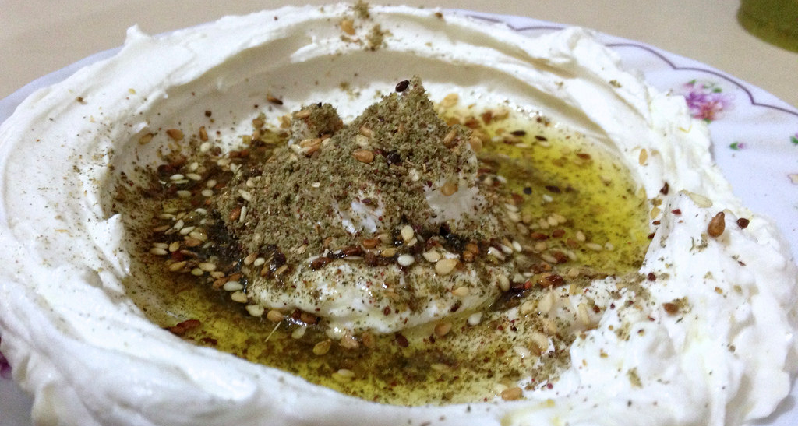 An easy, easy, easy summer dish around which to build an even easier summer meal.  What is Za’atar? Otherwise known as “The holy hyssop,” it’s a Middle Eastern seasoning mix made from hyssop, Israeli sumac (different than American sumac, which cannot be eaten), sesame seeds, sesame oil, wheat bran, parsley and sea salt.  Refrigerate after opening to keep fresh.  I fell in love with Za’atar in Israel over 20 years ago.

Greek yogurt is to die for.  Like sour cream, only better because it’s got gut-friendly, probiotic bacteria.

How to make this a great summer dinner?  Put out on table with a plate of sliced red, yellow and orange tomatoes garnished with chopped fresh basil, a bowl of taboulie and chose a pitted, oil-cured black olive that you’ll find in our grab-and-go refrigerator case.   Put out a plate of cucumber rounds and those same whole grain pita wedges.  Voila!

If you want to make this meal more substantial, grill chicken or shrimp and sprinkle with Za’atar.  Or mix a can of organic black beans and 2 cups organic corn (fresh or frozen).  Season with Za’atar.

How else to use Za’atar?  Liz (who used to work in our kitchen but now works with Heifer International) used to say she loved to drizzle veggies with olive oil, grill them and sprinkle with Za’atar.   Liz’s favorite way to use Za’atar was to mix a spoonful into Bariani olive oil and use as a dipping oil for bread or crudités.  Adam absolutely loves Za’atar on eggs.

From the horse’s mouth (as they say!)  Tsippi, ­ wife of Nimmi Lasman, who sells us this product, says to cut pita bread into wedges, brush with olive oil, sprinkle with Za’atar and then toast in a hot oven for 5-10 minutes.  Cool and serve nice and crunchy.  Nibble on pita wedges, or dip in our hummus.

Okay, maybe we’re jumping the gun a little when we suggest ripe, summer tomatoes and garden-fresh cucumbers, but they’re coming, they really are!  I put a vegetable garden where my front lawn used to be.  Did any of you do that this year?  It’s lots of fun.  Especially for the bunny rabbits…!