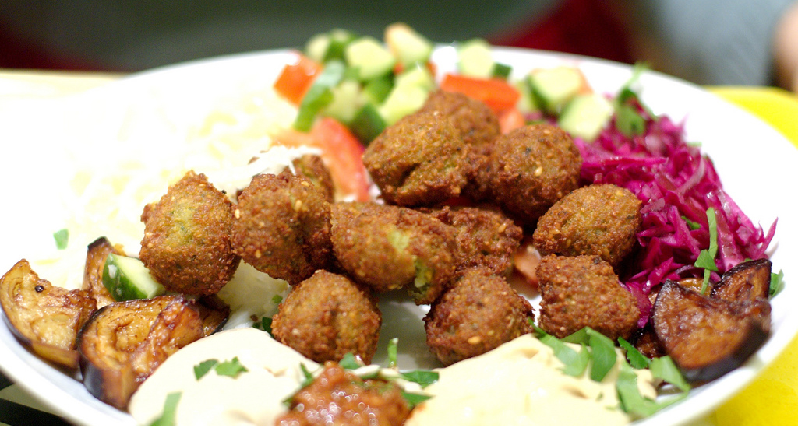 Oops — we ate it all before we took a picture… so this photo of Falafel At L’as du Falafel in Paris, Le Marais is courtesy of Janek Mann (via Flickr)

In Syria, Lebanon and Jordan, falafel is made with a mixture of chickpeas and fava beans.  In Israel, where falafel is the national dish (!), it’s made with chickpeas alone.  I like a version in which east meets west, where new immigrants from eastern Europe added buckwheat (aka kasha) to their chickpeas, instead of flour used in modern times.  Buckwheat, which looks like a grain, is gluten-free, and actually a fruit seed related to rhubarb and sorrel.

Optional (for the platter or pita):

whatever chopped veggies and Middle-Eastern (or Eastern European) salads and dips you can get your hands on!  Fresh diced tomatoes or cucumbers, grilled yellow zucchini, taboulleh, baba ghanouj, muhammara, even an Indian raita would belong on this plate.  Pickled veggies, olives, hot sauce… Greek yogurt with za’atar and pomegranate seeds… of course some pita bread or rice.

Back to the Falafel:

Using the steel blade of a food processor, pulse ingredients until they resemble MOIST, fine breadcrumbs.  If batter isn’t moist enough to hold together, mix in water, 1 Tbsp at a time, until it does.  A moist batter will give you falafel that is tender and not too dry.  Allow batter to stand for ½ hour.

Heat about 1½ inches of oil in fry pan.  (You can use a fryer, too.  You can bake falafel, but they’re not nearly as yummy.) Make balls the size of walnuts.  Drop into sizzling oil.  Be careful not to cause oil to splash.  Fry falafel to a deep brown, about 4 minutes, turning them after 2 minutes.

Serve immediately with toothpicks as an appetizer, top salads with falafel, make part of a platter, or place three falafel inside a pita bread half with other stuffings and toppings of choice.  Dress with tahini sauce.

Put it all in a blender.

Feel free to double, triple, or quadruple this recipe.  Will keep for a week in the fridge.