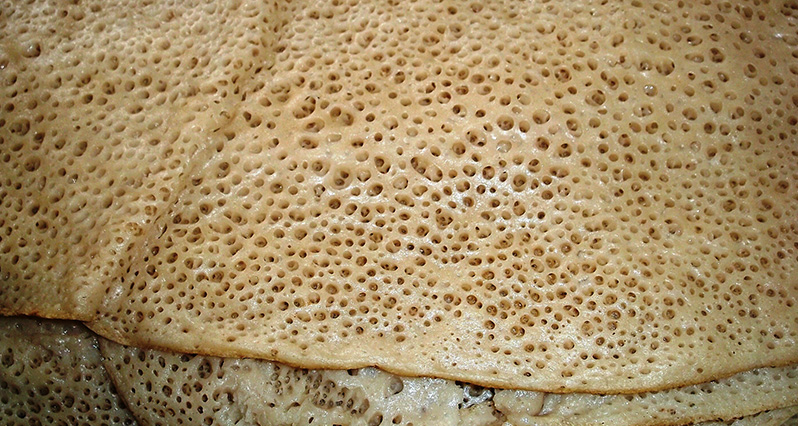 Making Injera, like making yogurt or other fermented foods, is an art as much as a science.  Once you get the hang of it, it’s easy.

Did you know that it takes 150 grains of teff, which grows mainly in the highlands of Ethiopia, to equal the size of a kernel of wheat?  Teff is a nutritional powerhouse, rich in calcium, iron, fiber and protein. Because teff is also one of the gluten-free grains, along with amaranth, buckwheat, millet, and quinoa, injera (which is a sourdough bread) doesn’t rise, but once fermented becomes a spongy, interesting flatbread often used as an edible tablecloth to scoop up vegetable stews, meat and juice from tomatoes!

The injera served in East African restaurants in the United States is mostly wheat (at least all the restaurants I’ve eaten in), and not even whole wheat.  I tried making injera using only teff first for a cooking class because I wanted to see if it was possible.  So many people told me using just teff wouldn’t work.  Well, it does, and here’s the simple recipe so now, you, too, can make injera and get to know teff.

Mix the teff flour with water and salt until no lumps remain and it looks like a thinnish pancake batter.  Let stand in a bowl covered with a dish towel at room temperature until the mixture bubbles and has turned sour.  This may take as long as 3 days.  [I put my towel-covered bowl on top of a pilot light on my stove or gas heater, and the process is pretty darn quick.]

When injera is bubbling nicely and smells fermented, it’s time to lightly oil an 8-9 inch skillet with ghee, coconut oil or EVOO.  A cast iron skillet is best, but if you don’t have one, don’t fret, make this flatbread all the same!  Heat skillet over medium heat.  Put ¼ C batter at a time in skillet.  Swirl batter to cover the surface of your skillet and make a pancake-like flatbread.  Imagine you’re making a slightly thicker French crepe…Repeat this process several times at least.  If using a “regular” skillet, not cast iron, you can pick it up in the air and swirl your batter.  My Grandma Sarah used to use an enamel skillet to make her crepes.

Cook each injera round until bubbles form in the dough, burst, and the edges lift from the pan.  Don’t let brown or it will become dry, and don’t flip as it is supposed to be cooked on one side only.   Remove and let flatbread cool with towels or wrap or foil between successive pieces so they don’t stick together.
To serve, lay injera on a plate and ladle food on top, or serve injera on the side so everyone can tear off pieces and use it to scoop up food.