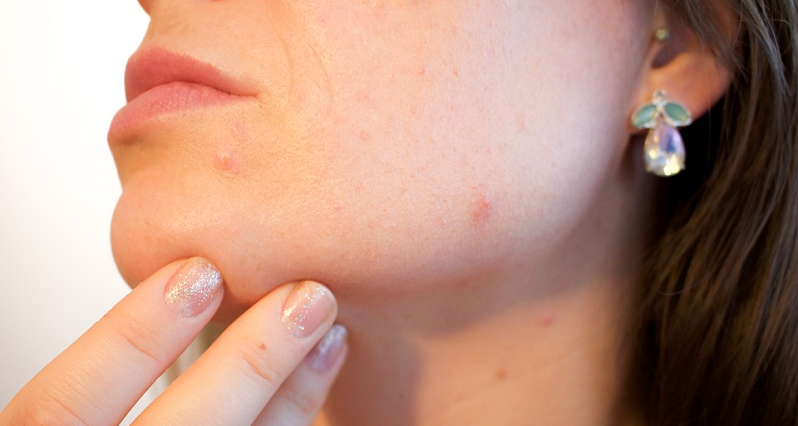 Hey teenagers! (and adults): Most acne isn’t as bad as you think it is…  Just sayin…

Acne is one of those things that doesn’t really hurt and probably won’t kill you, but it can still make your life pretty miserable. But there are some things you can do about it. And you don’t have to be a teenager either.

If you look closely at your skin, you’ll see thousands upon thousands of pores. What you can’t see is that inside these pores there are tiny, little sebaceous glands that produce an oily substance called sebum, which helps keep the skin moist and protected. Acne occurs when the pores get clogged, the sebum can’t get out, and the whole thing swells up like a balloon ready to burst. (Testosterone, produced by both males and females, increases sebum production, which is why teen-agers with those mythical “raging hormones” are usually the hardest hit). On top of that, clogged pores make an ideal home for a bacterium called Propionibacterium acnes, which colonizes the pimple and causes the area to become inflamed. (Almost all of us have this bacterium on our skins, but we don’t all have acne: the underlying problem, then, isn’t the bacterium’s existence, but that conditions exist which allow it to overgrow).

Many acne treatments focus on killing this bacterium. That’s what all those Benzoyl Peroxide products (i.e. Oxy, Clearasil, etc.) do. Doctors may also prescribe systemic antibiotics. These are often quite effective, but they have some drawbacks. First of all, systemic antibiotics kill off the “friendly” bacteria that live in our guts. (This is a big deal! The friendly bacteria help us digest and absorb food, lower cancer risk and cholesterol levels, improve immune function, and control the growth of “unfriendly” bacteria and fungi). If you just took antibiotics for a week or two, this wouldn’t be so bad: just tough it out, then take probiotics to replenish the friendly bacteria afterwards. But if you’re taking antibiotics for a couple of years… Secondly, there’s a risk that bacteria will develop resistance to the drugs. Thirdly, there are occasional side effects. And finally, the antibiotics do nothing to change the underlying problem.

Another prescription is Accutane, a synthetic version of vitamin A (natural vitamin A may also work). While this is often the single most effective treatment, it’s dangerous because of the extremely high doses that must be used. First of all, there is the issue of severe birth defects if the user becomes pregnant. Then there are all the other symptoms of Vitamin A toxicity. And finally, Accutane use has been correlated with higher rates of depression and suicide. If you want to use Accutane or high-dose vitamin A, please do so only under the supervision of a doctor.

Zinc and Vitamin B6

I think that the cornerstone of any acne treatment regimen should be the mineral, zinc. Zinc helps the immune system fight off bacteria, is needed to process fats and oils in the body, and helps process testosterone. 13- and 14-year-olds have the lowest zinc levels of any age group, and acne sufferers are even worse off, with less zinc in their blood, hair, nails, and skin compared to others their own age. When you see this, and then remember how important zinc is for normal growth, wound healing, brain chemistry, and liver health, you’d probably want to take zinc even if it weren’t going to help your acne!

The fact is, zinc should help, although, depending on how you look at the research, this is still controversial. On one hand, there are quite a few studies which show zinc to be just as effective as antibiotics in treating acne, with fewer side effects. But on the other hand, there are studies which show zinc not to be effective at all. Why the discrepancy? Well, earlier studies used poorly-absorbed zinc sulfate and showed little or no effect. More recent studies, however, have had much better results using the better-absorbed zinc gluconate or effervescent zinc sulfate (which chemically reacts in the fizzy drink to form zinc citrate and tartrate). Some forms of zinc which are absorbed even better are zinc picolinate and zinc mono-methionine (“Optizinc”). Although they haven’t been researched in terms of acne specifically, it would be reasonable to assume they’d work even better.

I’d take 30 mg of zinc, twice a day. Zinc makes some people nauseous on an empty stomach, so take it with food. Also, zinc can displace copper from the system. If you drink tap water, which is copper-rich, you probably have copper to spare. Still, you might want to take a zinc-copper combo, just to be safe.

Vitamin B6 (pyridoxine) can also help acne. A study dating back to 1942(!) gave B6 to 37 acne sufferers, and a placebo to 35. The B6 users started on 25 mg twice daily, but went up to 50 mg 5 times daily if the lower doses weren’t working. 24.3% of the B6 users showed “complete clearing” and 51.5% showed “definite improvement”; versus 0% and 20% respectively in the placebo group. B6 helps balance hormones levels, therefore it might be especially useful for women whose acne flares with monthly cycles.

It is believed that essential fatty acids from flax oil, fish oil, etc. can also help with acne. But while there’s some indirect, circumstantial evidence that sort of points in that direction, there isn’t anything concrete yet. So, should you take them? Well, they’re good for you. There’s evidence they help with ADHD, and a million other things, too. Bearing all that in mind, and considering that they might help, you should probably try them out. (And tune in next month, when fats and oils will be the topic!)

The term “blood-purifying” means different things to different people but in this context, I’m referring to herbs that “cleanse the blood” by promoting detoxification via the liver and colon. (After all, acne can be exacerbated by toxins in the bloodstream). Herbs on this list include burdock, yellowdock, dandelion (the root more than the leaf), and oregon grape root. Much like the EFA’s, there isn’t a lot of hard evidence here, but I have personally seen them work, and heard from quite a few customers that they work. Instead of picking just one herb, you can take a combination formula: “Dermacomplex” from Rainbow Light is a good one in tablet form; the Milk Thistle/Yellowdock combo from Gaia, and the Dandelion/Milk Thistle from Herbpharm are good liquids.

You should give all these – the zinc, B6, and herbals – three months to work, although they’ll often work sooner than that. The herbals may make acne worse for a few weeks until it starts clearing up. And beware cystic acne, where the pimples grow down into the skin instead of coming to a head. This is the kind of acne which can cause permanent scarring. Certainly no reason not to try nutritional therapies here, but you might also want to go see a good dermatologist.

Of course don’t overlook topical treatments. First, gently cleanse the skin twice a day to keep the pores clear. And look for tea tree oil products. Tea tree is an effective disinfectant (active against 27 of 31 strains of P. acnes), but not as drying as benzoyl peroxide. In one study, a solution of 5% tea tree oil was almost as effective as 5% benzoyl peroxide against mild acne. And since tea tree is gentler on the skin, you can usually go stronger than 5%. You can find plain tea tree oil, facial washes, creams, etc. Perhaps my favorite products are the blemish sticks put out by Burt’s Bees, Thursday Plantation, and Arkopharma. They all contain tea tree and other essential oils in little containers the size of tubes of Chap Stick. In addition to tea tree products, people really seem to like the zinc cream we sell. Sulfur-based acne soaps, like the Derma-Klear soap from Enzymatic Therapy, are also quite good.

Finally, food can play a major role. Of course conventional wisdom says to stay away from fatty, oily foods in general, but as we’ve seen, some oils are actually considered beneficial. Certainly, fried and hydrogenated oils should be avoided. They interfere with the body’s ability to use the good oils, and can bog down the intestines. But I’ve never seen any evidence that good, clean, health-promoting oils such as olive oil, sesame, or pumpkinseed oil promote acne.

Perhaps most important to avoid is sugar. Researchers have found more sugar in the skin of acne sufferers versus controls, and trials have shown that insulin injections (like diabetics use to lower their blood sugar) can clear up acne. It has also been reported that the mineral chromium, which helps the body use insulin and thus lowers blood sugar, can treat acne as well. Interestingly, there was a study that showed eating protein helped acne – or at least that’s what the authors of the study said it showed. If you actually look at the study, the people who ate the most protein also ate the least carbohydrates (including sugar!)

The ideal diet for acne would include lots of vegetables, fish, and lean meats. Fruits and whole grains are also okay. Refined carbohydrates (white flour, white sugar, and sweet drinks, including juice), should be avoided when possible. And stay away from those bad fats. Make sure there’s enough fiber and plenty of water. Take a multivitamin, too.