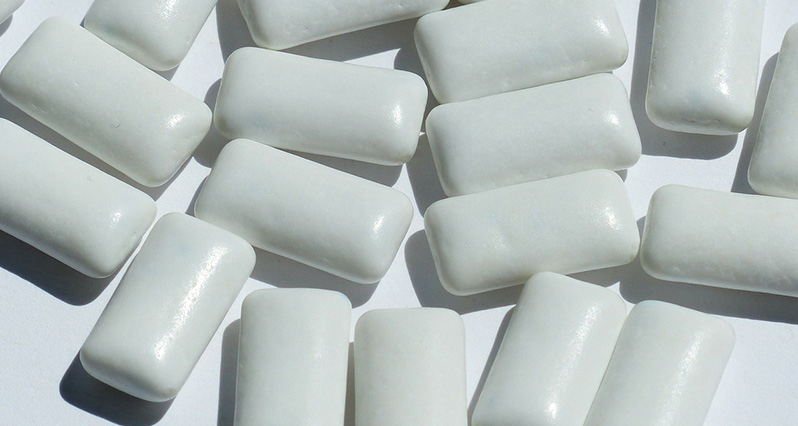 I’m always on the lookout for cheap and easy ways to deal with complicated and intransigent situations.  So I was thrilled to see research where teenagers did better in math class when they chewed gum.

108 middle-schoolers were randomly assigned to either chew gum or not chew gum during math class, and while they were doing their homework[1].  After 14 weeks of “treatment,” the students who had been assigned to chew gum did better on a standardized exam.  According to their teachers, they paid better attention in class, needed less breaks, and were less fidgety.  And they got better grades.  Granted, the research was funded by the Wrigley (chewing gum) company, but it still seemed fairly sound.So it got me to looking at what else gum might do.  Turns out, there’s a lot.  And for the most part we’re talking solid research here.  Of course a lot of it involves gum with specific nutrients or medicines in it nicotine is the big one but there’s also a fair amount where the simple act of chewing seems to do the trick.

For thousands of years, people around the world have chewed gum.  Herbalists and medical anthropologists like to point out that these gums basically resin or sap from trees were antimicrobial, that they’d protect us from tooth decay, gum disease, food poisoning, and respiratory tract infections.  In other words, our ancestors weren’t flapping their jaws for recreational purposes alone.

Even in the modern gum era, a lot of gum has boasted health properties, from Beeman’s pepsin chewing gum of the early 1900s (to aid digestion), to today’s gums that are marketed to prevent tooth decay, freshen breath, and, of course, help us quit smoking.

So what else can gum do?  Here are just a few highlights from the research:

In the last few years, a number of trials have explored whether gum might help.  The idea being that chewing could send a signal to the lower GI that “things are in motion.”[2]  Well, it doesn’t work right away, but chewing gum has been shown to help to restore bowel motility more quickly in everyone from children following abdominal surgery, to women after a Caesarian section, to cancer patients after surgery for kidney cancer.

Similarly, chewing gum has been shown to help with a medical procedure called capsule endoscopy, where patients swallow a tiny capsule-probe that records its transit through the GI tract.

The problem is, with sluggish digestion, sometimes the capsule doesn’t travel fast, or far, enough.  Once again, chewing gum can stimulate healthy gut motility.  In a recent study, people who chewed gum for 30 minutes every two hours moved the probe through both the stomach and small intestine faster, and were 20% more likely to get it to the large intestine within 8 hours.

While all of these trials focused on acute, “medical” situations, it would be worth exploring if gum-chewing might not help in “garden variety” constipation, or perhaps gastroparesis.  I haven’t been able to find any research on this yet; I don’t know if it will work.  But it certainly wouldn’t hurt to try and chew some gum and see for yourself.

In addition to the “Wrigley trial,” there have been a few other small trials looking at chewing gum and focus/memory.  Here, results have been mixed.  One trial in 2002 found that gum-chewing improved memory but not attention.  A later trial found gum was able to sustain attention over time better than placebo, but made people less alert and cognitively flexible (able to “think on their feet”) short-term.

In research out of Australia last year, 40 young adults were randomized to either chew gum or not while performing difficult and stressful tasks in the laboratory.  One day, the people performed low-stress tasks.  Another day, they performed high-stress tasks.  During both levels of stress, the people who chewed gum were more alert, less anxious, and had lower cortisol levels.  They also performed their tasks better.

And in research out of the UK earlier this year, 121 volunteers were randomized to either chew gum (half mint, half fruit) or not, while once again having to complete difficult cognitive tasks.  To further complicate things, half the people had to complete their tasks while being exposed to loud (stressful) noises.  Across the board, the gum-chewers reported less anxiety, plus better mood and better focus.  The difference was greater the harder the tasks got.

It’s tempting to lump “appetite” in with “mood,” because so many of us eat, not because we’re physiologically hungry, but because we’re bored, depressed, anxious or dissatisfied.  The act of chewing can calm us, and, in a sense satisfy our cravings[3].

In a number of small, inconclusive trials, chewing gum helped dieters stick to their diets.

Here, the research moves away from just the act of chewing, to gums that deliver specific nutrition.  Gum is an ideal delivery vehicle for oral health nutrition, because it holds the nutrition in contact with the mouth for a while.

There are two major kinds of gum used in oral health: xylitol gum, and what I’ll call “mineral gum.”

Xylitol, or birch sugar, is what chemists call a “sugar alcohol.”  Like other sugar alcohols (sorbitol, mannitol, erythritol, etc.) it functions as an almost non-caloric, non-cariogenic sweetener.  It’s also a good antibacterial on contact, especially against the kinds of bacteria that colonize the mouth, ears, throat, and sinuses.  Not surprisingly, there’s some pretty solid research showing that chewing xylitol gum can reduce the bacterial load in the mouth, and reduce the number of cavities people get.  Two studies out of Finland (where xylitol originated) showed that kids who chewed xylitol gum had one cavity on average for every three that other kids had.

“Mineral gums” can contain either calcium compounds or broad-spectrum mineral solutions derived from sea algae.  With both, the results are very, very impressive: worn-down tooth enamel can remineralize dramatically over a number of months.  Unfortunately, I have not found any of these on the market yet[4].

One of the most surprising areas of research, at least for me, has been xylitol gum versus ear infections.  There have been quite a few trials solid ones: placebo-controlled, long-term, in a variety of countries which have pretty conclusively proven that chewing gum with xylitol (or other polyols) will significantly reduce the number, duration, and severity of ear infections in children.

Here, xylitol gum isn’t a cure, but a preventative.  For example, in one Finnish trial 306 children from 11 daycare centers were randomized to either chew xylitol gum or regular (sugar) gum every day for two months.  At the end of the trial, 20% of the regular-gum group had had an ear infection, vs. only 12% of the xylitol group a 40% reduction.

So, add to that the fact that it’s safe, cheap, and prevents cavities not to mention that thing about the math and I can’t help but wonder why we’ve been telling kids all those years not to chew gum in class.

[1] The gum-chewers didn’t always follow instructions, though.  They reported chewing gum 86% of the time during class, but only 36% of the time during homework.  Chances are, the study results would have shown a greater difference between the gum and the control group if they’d stuck to the program better.

[2] This is largely how digestive bitters work: by reflexively stimulating digestion.

[3] One of my favorite studies on weight control involved people divided into two groups.  One group started the day with a portion of jelly beans; the other, with a big cup of sugary “fruit” punch.  Both snacks were nutritionally-identical made from the same ingredients, composed of the same number of calories, etc.  The only difference is, one you had to chew, and one you didn’t.

The researchers then tracked what everyone ate for the rest of the day.

Turns out, the people who drank the punch ended up eating an additional 400 calories over the day.  The idea being, chewing satisfies something and when that something doesn’t get satisfied, we seek out more and more food to satisfy it.

[4] For what it’s worth, I’ve long believed that drinking mineral water is one of the best things we can do for our teeth.  It’s not that we’re simply “getting” minerals, but actually putting them in contact with our teeth throughout the day.