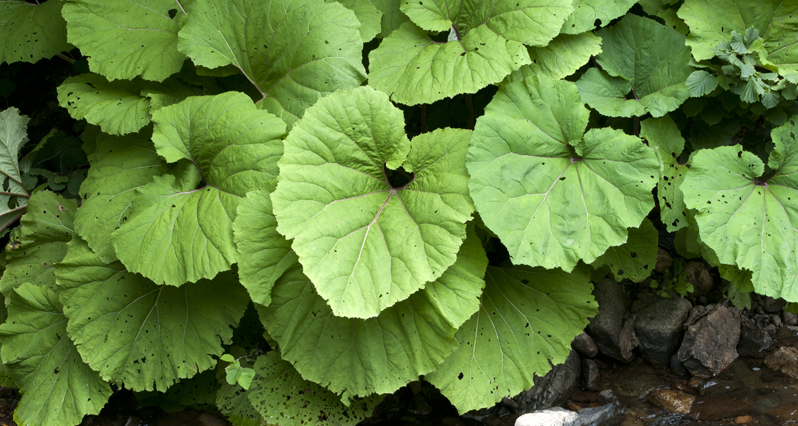 …and Migraines, and Urinary Incontinence, and Maybe Some Other Stuff Too

Butterbur (Petasites hybridus) has the largest leaves of any plant native to England, as much as three feet across. In olden times, people used to wrap butter in them.

It’s the root, however, that’s used medicinally. First and foremost, butterbur reduces spasms in smooth muscle[1]. This translates to research-proven benefits in urinary incontinence (spasming bladder), migraines (spasming blood vessels), and asthma (spasming airways in the lungs) – and benefits perhaps not yet proven in clinical trials, but still very real, in intestinal griping, spasm of the bile duct, etc.

The research on migraines is especially impressive.

For example in one trial, 245 people who suffered between two to six migraines a months were randomized to receive either 50 or 75 mg of a butterbur extract, or placebo twice daily for four months. At the end of four months, the people taking 50 mg had suffered 36% fewer migraines; those receiving 75 mg had suffered 48% fewer.

Now bear in mind two things. First, this study counted migraines during all four months, including the very first month when the butterbur may not have had time to fully kick in. I’d be willing to bet that if the researchers just looked at months three and four, the numbers would have been even more impressive. Also bear in mind, this was simply counting migraine frequency; there was no mention of severity. Yet when people take butterbur, not only do they tend to have fewer migraines, the migraines they do have tend to be less harsh.

The other major thing butterbur handles is allergies. There’s a ton of research, moving beyond even placebo-controlled trials to trials that used active controls – comparing butterbur to some of the most popular over-the-counter allergy medications. In one study, it worked as well as Flonase® for allergic rhinitis (runny or stuffy nose caused by allergy). In another study, it worked as well as Allegra® for the same condition. Now here’s the thing: it deals with allergies and it deals with spasming smooth muscle: for allergic asthma, then, this herb can do a lot.

One of the true “magic bullet” stories I’ve heard recently comes from a customer with a 12(?)-year-old son. The son has allergic asthma, and he’d been taking nettles, quercetin, homeopathics, and other supplements for a few years with only minor improvements. Well, it’s been months now since he started taking a half-dropperful of butterbur tincture every night – and so far, he hasn’t needed his inhaler once. Which, the father assures me, is a huge breakthrough. (Of course it might not work that well for you. In one open trial of butterbur in asthma, only 40% of the people began using less of their medications. Which brings me to an important point: yes, you can take butterbur along with your pharmaceuticals).

In addition to all this, there’s some early research that butterbur could prevent chemical damage to the brain. And that it may help prevent ulcers, especially those caused by alcohol.

Most of the research on butterbur has been done with a patented extract sold under the names Petadolex and Urovex in this country[2]. I’m not convinced it’s necessary to spend extra to buy brand name stuff. I’ve known a number of people who’ve done quite well with other (cheaper) quality brands such as Solary and Herb Pharm.

Butterbur contains small levels of toxic compounds called pyrrolizidine alkaloids. The levels probably aren’t enough to be especially concerned with. One review in a German medical journal estimated the frequency of serious adverse effects at 1 in 175,000 – which sure beats aspirin. Nevertheless it’s worth looking for a brand that certifies their butterbur is “p.a. free.”