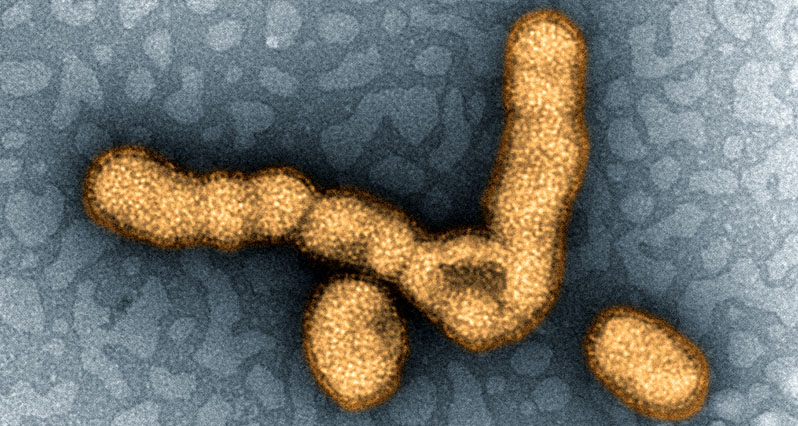 An H1N1 flu particle under a high-powered microscope

Public Health bulletins are sounding more and more these days like a Dr. Seuss book, evocative less of mass pandemic death than whimsical barnyard shenanigans.  And yet we’re being told to fear mass pandemic death sort of I mean, we’re not supposed to panic or anything….at least not yet.

It can all be very confusing.

As I write this now, it’s the middle of May, and we’re either at the end of the Great Swine Flu Pandemic of 2009, or the beginning.  So far, it doesn’t seem to be a big deal.  Yes, people have died, and I don’t mean to take that lightly.  But an average of 36,000 people dies every year from the flu!  Not swine flu or bird flu just the flu.   Most victims are the very young or very old, and people with weakened immune systems.  The deaths we’ve seen from the swine flu follow a similar pattern.

So, why are we taking these barnyard flus so seriously?

Most of these mutations are relatively minor.  They might give the flu a head start, but nothing the immune system can’t catch up to.  More significant mutations, however, have been known to occur, and these cause bigger problems.  Since the first flu strain was isolated in 1935, major mutations have been recorded every 10-15 years, each one linked to a large international outbreak[1].

The danger with all these barnyard flus if they can make the jump from animal to person, and if they maintain their virulence in doing so is that they present the immune system with something so novel, most of us would have very little immunity, if any[2], to it.  The so-called “Spanish” flu pandemic 1918-1919 was the last flu we know of to jump species.  It killed 500,000 Americans, and an estimated 20-100 million people worldwide.

The chance of a barnyard flu jumping species on any given day is small.  But the chance is there.  And no matter how many false alarms, we should continue to take it seriously, just like we take earthquakes, lightning strikes, and house fires seriously.  I mean, no one of us actually believes our house is going to burn down, but most of us still have a smoke detector and fire extinguisher just in case.

So the international health services aren’t just crying wolf.  They’re alerting the public to what could be probably isn’t, but it could be a pandemic.

So we’re alerted now what?

Obviously, we can try and avoid exposure.  We can wash our hands, stay home when we’re sick and cover our mouths when we cough.  We can close schools, suggest isolation, and enforce quarantine.  Or we can hole up in hermetically-sealed underground bunkers, eating canned food, and waiting for it to pass[3].  Obviously, some of these measures are more effective (and practical) than others.

So that’s a Public Health approach.  As for a medical approach, right now, we don’t have a very good one.  Yes, we have vaccines.  But vaccines only teach the immune system to recognize existing strains of the flu, not emerging mutations.  Setting aside barnyard flus for a moment, the best data we have show that vaccines protects healthy adults from just 25% of the flus out there just the strain used to make the vaccine.  In seniors, it doesn’t appear to help at all.  In kids, it does; but in infants, it’s useless.  (Of course I’m vastly oversimplifying the research…).  I think the flu vaccine does most people some good.  But I’d hate to bet my life on it.

So that’s prevention; what about intervention?  Most of what the mainstream has to offer here is palliative fever reducers[4], cough suppressants, hydration, etc. to either make your flu more comfortable, or help you survive it if it gets flat-out life-threatening.

And then there’s oseltamivir (“Tamiflu”) a prescription antiviral.  The best data show that Tamiflu can cut the time you’re sick with the flu by a less than a third in adults, and about a ¼ in kids.  Not bad, but not great either.  And the benefits seem to depend on you taking it within the first 48 hours (although, to be fair, a lot of natural meds also falls off in efficacy if you don’t take them right away).

Tamiflu also comes with a disturbing array of potential side effects.  Common ones include the normal digestive disturbances nausea, cramping, diarrhea, etc. and headaches.  Less common ones include liver damage, and allergic reaction.  And then there’s the neuropsychiatric weirdness which pops up rarely, but has led a number of people mostly children and young adults to jump off buildings and otherwise harm themselves.  Deliriums and hallucinations have been reported, and have led the governments of both the U.S. and Japan to mandate warning labels.  The manufacturers of Tamiflu point out that the flu itself can cause delirium, but the data clearly indicate that, whatever that risk is, Tamiflu increases it.

If it was Tamiflu or nothing, and we were faced with a life-threatening pandemic, I’d say: “let’s all take Tamiflu!”  But the flus we’re dealing with right now aren’t especially life-threatening for otherwise healthy people and besides, we do have some highly effective natural options.

So what does natural medicine have to offer?  Perhaps the best-researched is a brand-name product called Oscilloccocinum.  In one large, very well-designed trial, Oscillo was about as effective as Tamiflu appears to be minus the side effects, but only if taken within the first 24 hours.  Personally, I think we can do better.

So we’re going to step away from what has the most research, and look instead at a three-part protocol that has, in my experience, flat-out worked.  Taken early (for colds as well as flus) this protocol almost always works.

1. Zinc: “The Facilitator” Zinc facilitates a number of key aspects of an immune response, and also prevents viruses from latching on to target cells in our mucous membranes.  It’s dirt-cheap, has 101 side benefits, and is useful both preventatively (about 50 mg a day), and acutely (150 mg a day, but for no more than a week).

Take it with food: it can make you nauseous otherwise.

2. Larch Tree Arabinogalactans: “The Motivator” Used to go under the brand-name “Larix,” but that might change soon, as the U.S, company that made it got bought by a large European firm.  Hopefully, they’ll finally spring for some human clinical trials….

Basically, Larix does what people hope Echinacea is going to do: stimulate the immune system to defend us against a viral infection.  For adults, 3-6 level tablespoons a day.

3. Antivirals: Some will view this as medical heresy.  Heresy, because many users and practitioners of natural medicine view simple germ-killers as “allopathic,” “shallow,” “Western” medicine medicine without a green philosophy.  They’d rather support the body’s own immune defenses, encourage the body’s own detoxification pathways, alter the body’s own terrain, etc., etc.

Well, I’m all for green philosophy, but more importantly, I’m for what works.  And herbal antivirals work.

I find myself running out of space, so I can’t get into all of them.  But let me clarify: antivirals do not include Echinacea, Goldenseal, colloidal silver, grapefruit seed extract, or vitamin C.  Garlic is only a very mild antiviral.  Not that these things aren’t useful, but they are not strong antivirals.

Historically, I’ve used a tincture of Lomatium root, which to my mind is the single best antiviral we have.  But now I recommend one of two products: one called “Istatis-6,” and the other called “The Immune Dragon Super Brew.”  I like the IDSB better, but I make it, and I make a few bucks of it, so of course I’d say that….

(And to all those that wished I wrote about Monolaurin, or Andrographis, or Elderberry all useful antivirals well, another time.)

[1] Or sometimes a previous strain reemerges.  In 1977, virologists thought they had isolated a new strain, only to discover it was identical to the dominant strain 27 years before.  People under age 27 were especially susceptible.

[2] Of course we would be able to develop immunity to the new strain, eventually.  But that usually takes 3-5 days.  In the meantime, we’d have to rely on our weaker innate immunity as a stopgap.  Innate immunity is ill-equipped to handle viruses.

[4] Bear in mind that fever is a defense mechanism.  Raising our temperature inhibits pathogen replication, and makes our immune systems more effective.  Fevers should be encouraged ? up to a point.  Occasionally, however, the fever goes too high.  Generally, 104? F is considered the cut-off point.