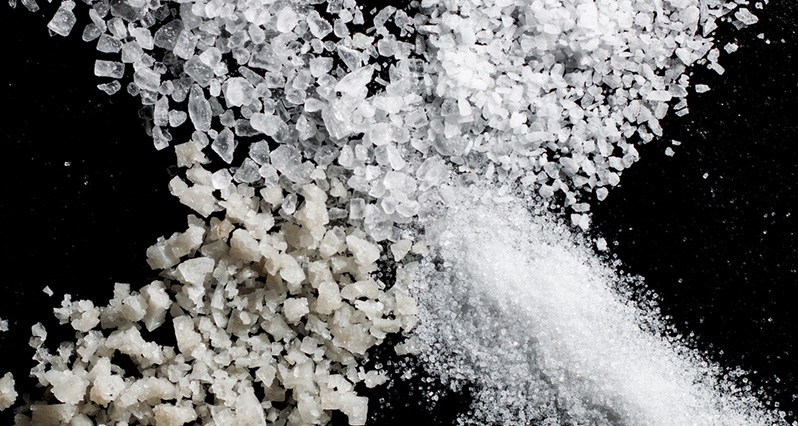 – Debra Stark (this appeared first in the Concord Journal)

I’ve been wondering for years whether salt, whose overall intake has maintained steady despite all the warnings (if it’s not in our packaged food, we’re adding it ourselves at the table), is really bad for us, or whether it’s just the refined salt that has done us in.

Does the kind of salt we add to our food make a difference?

Before we are born, we float in the womb in sole (so-lay), an ancient Celtic word for the watery-salty solution that comprises our bodily fluids. Those same Celtic ancients believed that sole came from the ocean and that we are all born from the same fluids arising from the same soul… Poetic, isn’t it?

So, back to salt. Yes, we need it live, but it can also harm us when we use too much.

The question is, however, are all salts created equal, and do they act the same in our bodies? I’m no scientist, but I think regular old table salt does more harm than good, and that it’s nothing like whole salt. Regular table salt has been “purified” and reduced to 99.9% sodium and chloride. All the 80-plus balancing trace elements and minerals that are important to us have been removed. Salt is no longer real salt. To me, table salt doesn’t even taste the same as real salt…

David Brownstein, MD, in Shattering the Myths About One of Nature’s Most Necessary Nutrients, says, “The chemicals used to remove the ‘impurities’ can include sulfuric acid or chlorine. All food-grade salt (refined salt) in the U.S. must comply with the National Academy of Science’s Food Chemicals Codex Sodium, Chloride Monograph (1996). Up to 2 percent of refined salt may contain anti-caking, free flowing, or conditioning agents, which can be toxic to the body. These agents include sodium ferrocyanide, ammonium citrate, and aluminum silicate.”

Why do we even use salt in our food? Well, salt not only intensifies flavor and makes food taste better, it’s pretty important for food safety and preservation (it’s an antimicrobial). Today manufacturers use table salt (“refined” salt as opposed to what I’m calling “real” salt) because it’s cheap and ubiquitous.

To me, refined salt is like white sugar, which is just sweet without all those wonderful flavor tones one gets in raw or coconut sugar, or honey or maple syrup. Table salt is salty without tonal flavors from the minerals that are stripped out.

Today we keep hearing that salt (but nobody says which kind) causes hypertension or high blood pressure. Many doctors tell us to lay off salt, to throw away the salt shaker.

Is there evidence to support this directive?

A review published by The Cochrane Collective in the American Journal of Hypertension in August, 2011, noted that results of its analysis of research on sodium and disease “showed no strong evidence of any effect of salt reduction on cardiovascular disease morbidity in people with normal blood pressure”  The other authors did not agree that reduction of salt was necessarily the best course of action. “Our review focuses on dietary advice and has not found robust evidence to support this approach.”

In a Journal of American Medicine paper by Michael H. Alderman, a hypertension expert at Albert Einstein College of Medicine, a low-salt diet was associated with better clinical outcomes in only 5 of the 11 studies he considered; in the rest, the people on the low-salt diet fared either the same or worse.

Again, which salt are the scientists talk about? None of the studies looked at the use of unrefined salt. None tested people who ate refined salt versus those who used unrefined salt. And it would be difficult to conduct such a study assuming we all eat out, eat convenience foods over which we have no control!

Remember all those 80 minerals that are stripped out of table salt? Well, every ten years, the U.S. government does an analysis of thousands of its citizens looking at various markers of health. One such marker has been mineral intake. This survey is known as the National Health and Nutrition Examination Survey (NHANES). Over the last 30 years, NHANES has found a correlation between inadequate levels of minerals and the presence of hypertension.

Could this have anything to do with the fact that table salt has been refined and stripped of minerals? What would happen if all salt used today suddenly were restored to its normal, natural form? I ask as the debate goes one, largely behind closed doors, that if unrefined salts (such as Celtic, Himalayan, Redmond Real Salt, and all those salts that are different colors and flavors from smoky to spicy) have the trace minerals we need, wouldn’t one make the assumption they might actually help prevent and treat hypertension?

There are books written about healing using real salts. Some recommend using ½ teaspoons of unrefined salt per day in two quarts of water and drinking that to help digestive illness, make the immune system work better, improve energy levels and brain function. One such book is Salt Your Way to Health.  Some give directions for making sole.

Unrefined salt is great for brushing your teeth (I combine Redmond Real Salt from Central Utah’s mineral-rich salt deposit from an ancient sea) with baking powder and keep the mixture in a jar). When used as a tooth powder on my toothbrush, this homemade tooth powder balances pH in the mouth and works against gum bleeding, periodontal diseases, ulcers and bad breath.

Away from teeth and back to flavor, unrefined salt crystals, in addition to being different colored, have different shapes too. And their different shapes change how we perceive the saltiness on our tongue. Smaller salt crystals too allowed for 20 percent less sodium in a test potato chip without affecting consumer preference. Refined salt crystals are typically finer than real salts, which seems a vote in table salt’s favor, but even so, taste testers found that because of their herbal, smoky, earthy flavors, 30 percent less of unrefined salt was needed to give food a “Wow!”

While the scientists duke it out and huge amounts of refined salt are given to humans and animals in studies to induce a hypertensive effect, I’m going to eat real, good salt. To me it’s the issue of whole versus broken down and denatured (made unnatural so products look “pure,” will keep longer on shelves, etc.). Whole wheat flour versus white flour. White sugar versus sugars that haven’t been bleached or refined.

I’m going to eat real, good salt not only because it seems more natural to me, but because they have more complex and interesting flavors.