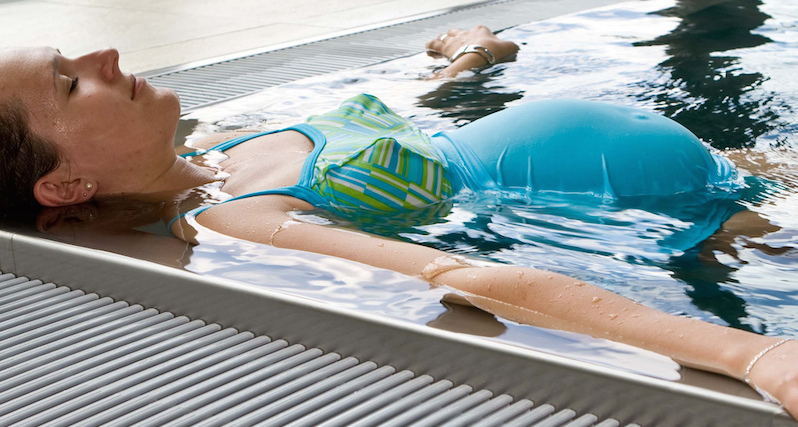 Photo courtesy of Thomas Pompernigg via Wikipedia and Creative Commons.

We’ll start with five supplements that every pregnant woman should take, and then move to solutions for specific issues – fighting a virus, indigestion, constipation, etc.

Choline is an unofficial member of the B-vitamin family, where it works alongside folic acid. Choline has been the subject of research in pregnancy for decades now, where it appears to promote brain development (infant intelligence, basically), along with some evidence that it may reduce the risk of ADHD and schizophrenia. Pregnant women with very low choline are more likely to have children with certain birth defects. Low choline also impairs liver function, and may make the fetus more susceptible to damage from alcohol and other toxins.

The evidence is compelling enough that, since 1998, the National Academy of Sciences has recommended 450 mg a day of choline for pregnant women (550 mg a day for nursing women.). Yet fewer than 1 in 4 of women get that much. And prenatal multis won’t cover the gap.

Choline is found in milk, meat, and especially eggs. It takes about a pound of red meat to get 450 mg. Or a pound-and-a-quarter of poultry or fish. But it only takes three large eggs. A three-egg day is a good day!

And of course there are choline capsules. Don’t overdo, though. Too-high doses of choline can cause nausea and dizziness, or even a fishy body odor.

Folate/Folic Acid – Get the Right Form of this Crucial Nutrient

Folic acid is a cheap, synthetic, inactive form of folate, common in supplements and fortified foods, but almost never found in nature. The body needs to convert folic acid to an active form called methyltetrahydrafolate (MTHF)), but not everyone does that efficiently. Most of us do okay. Some of us have a harder time. And a small fraction find it almost impossible.

Since you don’t always know which group you’re in, I suggest that everyone take a prenatal with active folate (MTHF). (And heck – men, too: there’s evidence that fathers with good folate have healthier babies as well).

This isn’t just about preventing birth defects. Good folate may be linked to smarter babies.

NAC stands for n-acetyl cysteine, an amino acid derivative that supports the liver, thins congestion, and fights colds and flus. Among many, many other things. (See more at www.DebrasNaturalGourmet.com/NAC).

Anything that might keep you from getting sick when you’re pregnant is a good thing. But NAC is so much more than that. Indeed, it is arguably our single most important nutrient to protect a pregnancy. Starting with the animal studies, we see that NAC reduces inflammation in the placenta following infection; reduces hypertension in the mother, and helps protect against vascular problems caused by smoking; and in the baby guards against brain damage caused by both inflammation and mercury.

In humans, NAC given to the mother preserves blood flow to the brain and reduces inflammation in newborns with chorioamnionitis, and prevents pre-term labor in women at high risk. We see at least two trials where NAC reduces the risk of miscarriage in women at high risk. There’s even evidence that NAC taken before you become pregnant maintains the health of egg, preserving the ability to conceive later.
Long story short, every pregnant woman should take NAC, especially in the first trimester. A standard dose is 600 mg twice a day.

Probiotics are the healthy bacteria which live in our guts, supporting digestion, detoxification, and immunity. Women who have healthier gut flora and/or who take probiotic supplements have healthier pregnancies, and healthier babies.

When it comes to the baby, we see first and foremost a better immune system. Notice I did not say “stronger”; I said “better.” So, yes, the baby will have stronger immune defenses against viruses and other infections. But better because we see a very significant and pronounced reduced risk of immune dysfunction, such as allergies and asthma. These benefits may persist throughout life. Baby is also less likely to suffer from colic or other digestive issues in the first months of life.

I recommend taking a good probiotic daily during pregnancy and switching brands every month.

Fish oils have been very well documented for decades or more. So I won’t really get into the claims they make the baby smarter. What I do want to talk about is the research where fish oil can have a profound, lifelong impact on allergies and asthma.  In 1990, in Denmark, 533 pregnant women were randomized to receive either a moderate dose of fish oil (2.7 g total omega-3s per day) or an olive oil placebo for the final three months of their pregnancies. The original purpose of the study was to investigate whether fish oil could prevent breach birth. Turns out, it did. (Slightly.)

Sixteen years later, another group of researchers checked in with the children. 523 children were still available for follow-up. The findings were remarkable. A mere three months of fish oil had reduced diagnoses of both asthma and allergies by two-thirds. It reduced allergic asthma by 87%. Consider the lifetime burden of either of these conditions. And now consider that the dose of fish oil used in the study costs $75 (plus tax) at our store.

There are herbal protocols to directly and vigorously induce labor, but I’m not going to get into them. I’ll leave that topic to the herbalist-midwives who really know what they’re doing.

As a general rule, the omega-6 fatty acid GLA (gamma-linolenic acid) provides nutrients which will eventually prepare the cervix, and allow the uterus to contract. Taking 300 mg a day of GLA after week 36 is probably a good idea. We get GLA from evening primrose and borage seed oils.

Fighting off a Cold:

One of your best bets (other than taking NAC, already covered above) is to use a neti pot twice daily throughout your pregnancy.

Taking probiotics regularly, staying hydrated, and eating fiber-rich whole foods are all important. But if you need a little extra help, consider magnesium.

There’s “good” magnesium, and “bad” magnesium. Here, you want the “bad” stuff. The so-called “good” magnesium, is good because it absorbs better. But in this case you want magnesium that doesn’t absorb – that stays in the gut, which is where it works. So look at magnesium oxide, 400-500 mg in the evenings. If that’s not enough after a few days, feel free to double it.

Anxiety and Tension in Pregnancy:

There isn’t enough space to go into all the individual herbs a person could use. Formulas usually work better than single herbs. The liquid extract from Wish Garden is excellent, and the tea from Earth Mama Angel Baby is pleasant and mild.

Vitamin B6 is effective for some women. A standard dose is 25 mg twice a day.      The herb ginger is also helpful for a lot of people. There are a lot of ways to take ginger – pills, tea, ginger ale, etc. – but my first suggestion to most people would be the very strong ginger lozenges from a company called Meltzer’s Puremints. A little tin will set you back less than $4 and last quite some time.

Digestive enzymes are safe during pregnancy.

You’ve already heard the advice to eat small, regular, nutrient-dense meals. And don’t lie down right after eating. Beyond that, consider digestive enzymes to help clear food from the stomach before it has a chance to back up. And then you can take things that help coat and soothe the esophagus.

Slippery Elm bark is a common ingredient in throat lozenges, where it coats and soothes on contact. The same herb (in the form of lozenges, tea, or capsules) can coat and soothe the stomach as well.

Another herb to look at is licorice. Normally, licorice can raise blood pressure in high doses or if you’re very sensitive. But you can also look at a form of licorice called DGL (or deglycerized licorice), which has the blood pressure-raising component removed.